Diving Silfra Beneath The Midnight Sun

Seeing rays of sunlight pierce the surface and illuminate the visibility of the water in front of you is one of the eerily beautiful sights divers regularly get to enjoy.

The vast majority of such experiences are realised during the daytime, yet those who have visited Iceland’s lakes midway through summer will have lived through something most people don’t even know is possible: diving at midnight with the sun guiding your way. The unusual phenomenon known as the Midnight Sun occurs in Scandinavian countries every year. When the Northern Hemisphere reaches its maximum inclination towards the sun, it lightens up the entire polar area and, instead of setting at midnight, only reaches its lowest altitude – in other words, the sun almost never goes down!

With between 20 and 22 hours of daylight throughout June, for divers it is a ravine within Iceland’s Thingvellir National Park that provides the most enchanting way to experience it. At 300m metres long, the legendary Silfra fissure is located at the crack between the North American and Eurasian tectonic plates. Connected to an underwater spring, the ravine contains some of the world’s clearest water, with such pristine conditions that anyone diving or snorkelling within its depths has a visibility of at least 100m.

Such unusual clarity provides an exceptional benefit for underwater photography, with anyone from novice snappers to professionals able to capture the beauty of its caves and valleys in extraordinary detail. What sets this place apart from other diving locations is your ability to photograph the landscape in such detail, with the crystal clearness of the water allowing cameras to pick up on the finite details of every colour, shadow and curve.

Scuba Dive Until The Midnight Sun Goes Down

With Magmadive, you and your camera can explore the many sections of this underwater paradise from the deepest area of the fissure known as the ‘Big Crack’ to the wider Silfra Hall, the more daring Silfra Cathedral and the stunning Silfra Lagoon, where its already expansive visibility is at its peak. Throughout our June 16 to 19 2016 Midnight Sun Diving Trip, you can experience all this through the glare of Iceland’s golden light, allowing you to dive until the early hours of the morning in a country where its awe inspiring landscapes are plain to see at all hours of the day. It’s the longest day of the year – a great time for staying outdoors, diving, and taking underwater photographs. 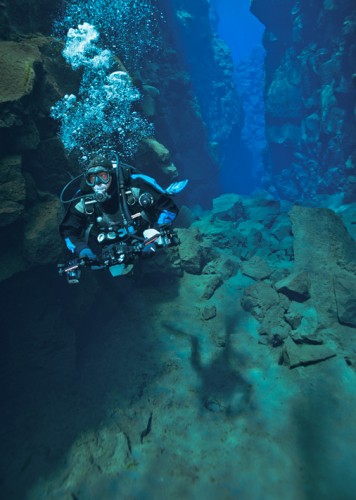 IMAGE: Ethereal light cascades down into the Silfra Cathedral.

IN THE KNOW: Back in June 2015 Magmadive organised Midnight Sun – Iceland’s first underwater competition open to experienced divers from around the world.