For most visitors to Iceland, the idea of flying inside a helicopter is thrilling beyond imagination, but scuba diving at Silfra afterwards – That’s just Spectacular!

Interestingly enough…The concept behind HELI DIVING was inspired by Tom Cruise’s visit to Iceland back in 2013. When, during his time out from shooting the sci-fi blockbuster ‘Oblivion’, Mr Cruise managed to fit in a private midnight sun dive at Silfra. Believe it or not, after diving in a drysuit for the very first time, Tom Cruise’s buoyancy control was pretty good. But then again, you’d expect that for a full-time action hero! 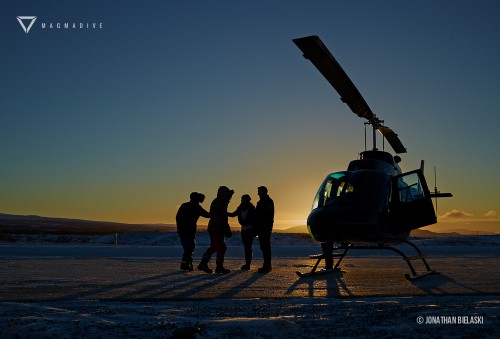 Shot on one of the coldest winter days on record in 2013, the official heli diving video was filmed in Thingvellir National Park by Jonathan Bielaski and Jeffery Garriock from Canada. The video was produced by Selma Karls from Labrador films of Iceland, featuring helicopter action sequences by Nordurflug. The video stars Magmadive pro’s David Ramsay and Kevin Martin exploring Silfra, one of the world’s top ten dive sites. If you fancy becoming an action hero for the day, Heli-diving is a combo trip featuring the collaborative forces between Nordurflug and Magmadive. For more information visit www.helicopter.is